Federalism: From Hamilton to Sitharaman

On a wintry evening in London early this year I attended a performance of the hit-musical Hamilton, based on the wondrouslife of Alexander Hamilton, a Founding Father of the United States of America who served as its first Secretary of the Treasury. 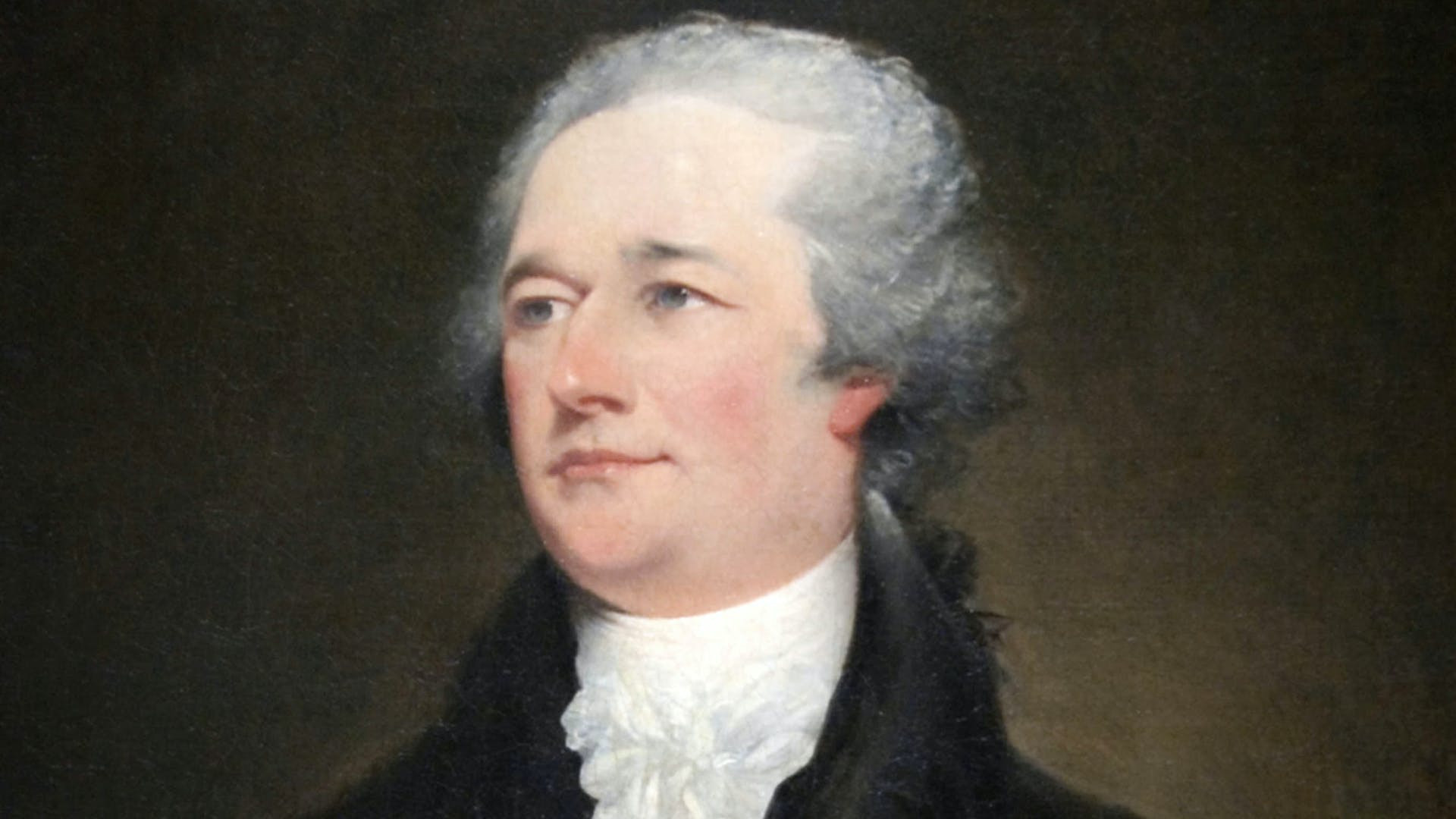 After two decades spent largely travelling at 30,000 feet and living out of suitcases, my life became very grounded after being elected MLA in 2016 (the 22 wards in my constituency are missing elected City Councilors as Local Body polls have not been held in Tamil Nadu for four years and so I am the single responder for all the local water/sewage/pot-hole/street-light problems). So, it was both unusual and ironic that I should learn about Hamilton the Federalist, at the Capital of the Colonial power he fought, while I myself served as an MLA in the least-Federal and most centrally-controlled large nation on Earth.

Though Article 1 of India’s Constitution explicitly states that India “shall be a Union of States,” the framers skewed the balance of power in the newly formed country heavily towards the union government in New Delhi. This imbalance was furthered by the 42nd Amendment to India’s Constitution, enacted during the draconian period (Emergency) when India was under the infamous Maintenance of Internal Security Act (or MISA).

The skew towards the centre has continued apace in the decades since.

A comparison to other large countries will show the overall results of such centralization. Subjects such as School Education and Policing are considered City/District prerogatives in both the United States (self-professed Capitalist-end of the Spectrum) and avowedly Communist China. Yet in India, these subjects are dealt with mostly at the State, and increasingly Union, level. It is worth noting that the staunchest critic of centralization, and therefore the greatest Champion of Federalism in Contemporary India, was none other than the former Chief Minister of Gujarat, Mr Narendra Modi of the BJP (up to 2014).

But ever since Mr. Modi was elected Prime Minister in 2014, the Union Government has been hell-bent on centralizing all policy decisions and schemes, leaving the States as mere Agents to execute its “Grand Designs.” Using catchy slogans of “One Nation, One X,” Mr Modi’s Government has attempted to imprint its authority on the lives of all Citizens, ranging from what we speak, to how our children learn.

A hallmark of such initiatives was the “One Nation, One Tax” initiative that resulted in the pan-India Goods & Services Tax (GST)in 2017. The scheme was designed (but not enacted) by the previous Congress-led Government, though with many structural differences to the one finally implemented. The adoption of GST resulted in a massive transfer of taxation powers from the States to the Union. Post GST, over 90% of such powers are vested in the Union Government alone, unlike in other large countries where States, and often counties and Cities, can levy taxes at rates they decide. What is more, using the loophole of multiple GST Cesses, the Union Government excludes Trillions of Rupees from the pool of Tax Revenues that it is constitutionally obligated to share with the States of India.

While the hypocrisy of Mr Modi’s U-Turn is brazen, one could also point out that the Congress Party which ran, or led the coalitions which ran, the Union Government for much of India’s history now espouses States’ Rights far more than their actions in power would indicate.

But such repressive attempts at Centralization are irrational, as evidenced by how much India’s States have diverged, on almost ANY measure of Development or Growth. Attempts at homogenization from New Delhi simply cannot yield the desired outcomes.

The table below compares the large states of Bihar (Population: >100 Million) & Tamil Nadu (Population: ~80 Million). Please note the variation of each to India’s Average also. 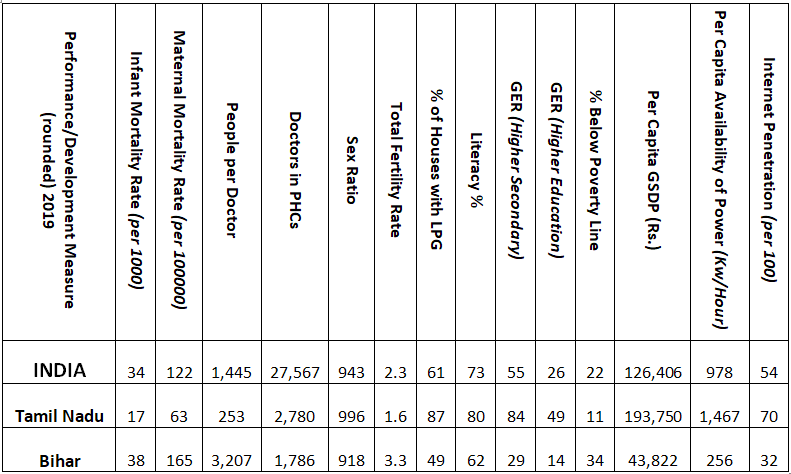 On what basis will Bihar & Tamil Nadu (each with more people than most countries of the world) implement, or benefit from a common “One Nation, One X” policy on any subject?

Let us return to Hamilton, the first Secretary of the Treasury of the United States (equivalent to India’s Union Finance Minister). His many Financial innovations included the ground-breaking and deeply controversial (at that time) Funding Act of 1790, the legislation that saw the US Federal Government assuming the responsibility to repay the Debts of each of the States incurred largely during the War for Independence. Remember that the United States is a country whose Constitution empowers States to levy their own Income Taxes. Where even the voting procedure for the Presidency is a State Subject. Where any subject NOT explicitly allocated to the Federal Government is each States’ right by DEFAULT. In this truly FEDERAL country, Alexander Hamilton and President George Washington convinced lawmakers that it was the responsibility of the Federal Government, for the greater good of the whole country, to simply assume the Debt of the States incurred during the war, thereby freeing up the States’ finances.

Fast-forward to India today, reeling under an economic crisis accelerated by the Covid19 Pandemic from an ongoing multi-year collapse starting with the Masterstroke of Demonetization (2016). An unprecedented collapse(Q1FY21 GDP has just been reported as -23.9% contraction in real terms) has triggered such a shortfall in GST revenues that the Union Government is hard-pressed to fulfil its STATUTORY Payments to the States, written into the core text of the 101st Amendment to the Constitution that created the GST.

India’s Finance Minister Ms. Nirmala Sitharaman, recently held discussions with the Finance Ministers of the States to address this issue, following which two written proposals were sent to the States. In the document, her Ministry has formally indicated that the Union Government will not stand by its statutory payment obligations, but rather will renege on the payments which are enshrined in Law.

Ms Sitharaman has spoken of an Act of God, to justify her stand. Some have even interpreted this as the Union Government invoking a Force Majeure clause, though none exists in the actual law. Surely the States’ need for funds increases when a major disaster occurs, which is perhaps why no such clause exists in the 2017 Law.

Ms Sitharaman has instead offered each State the option of borrowing funds (assuming increased Debt) to cover the Union Government’s default, under one of two different schemes, with the “gracious concession” of raising the Debt Ceiling by 0.5% of GSDP to enable such borrowing. As the final disservice 1, the States have been commanded to make their choice-of-option within 7 days.

To add insult to injury, Mr Modi is also going ahead with his Central Vista Project (a Rs 20,000 Crore wholly discretionary makeover of New Delhi’s Corridor of Power), even as his Government defaults on its obligations to States. It may yet prove to be Tughlaqian folly.

Even in the world’s most-centralized large country, where new authoritarian power-grabs are regularly orchestrated (the National Education Policy is a recent case in point), this decision on GST payments break new ground, and not in a good way.

The profound tragedy of the unprecedented accumulation of power by Mr Modi (aided by the Judiciary turning a blind eye in some cases) is that it is not accompanied by engagement with the requisite technical expertise to ensure proficient execution. Power is being concentrated in inept hands, thereby ensuring that misery is spread universally.

The Tamil saying The value of the Shade will be realized under the blazing Sun is apt for paraphrasing. The increasingly authoritarian and anti-Federal actions of Mr Modi & Ms Sitharaman highlight the value of Hamiltonian Federalism.

1 Under normal circumstances, all States & the Union Government are constrained to keep Annual Fiscal Deficits within a ceiling of 3% of GDP/GSDP by the 2003 FRBM Act of Parliament & Corresponding Acts of State Legislatures such as the 2003 FRA of Tamil Nadu. This ceiling is more honoured in the breach than the observance, not least by the Union Government of the past few years which has regularly violated this ceiling AFTER all manner of accounting tricks.

An abridged version of this article was published in The Hindu on 5th September, 2020