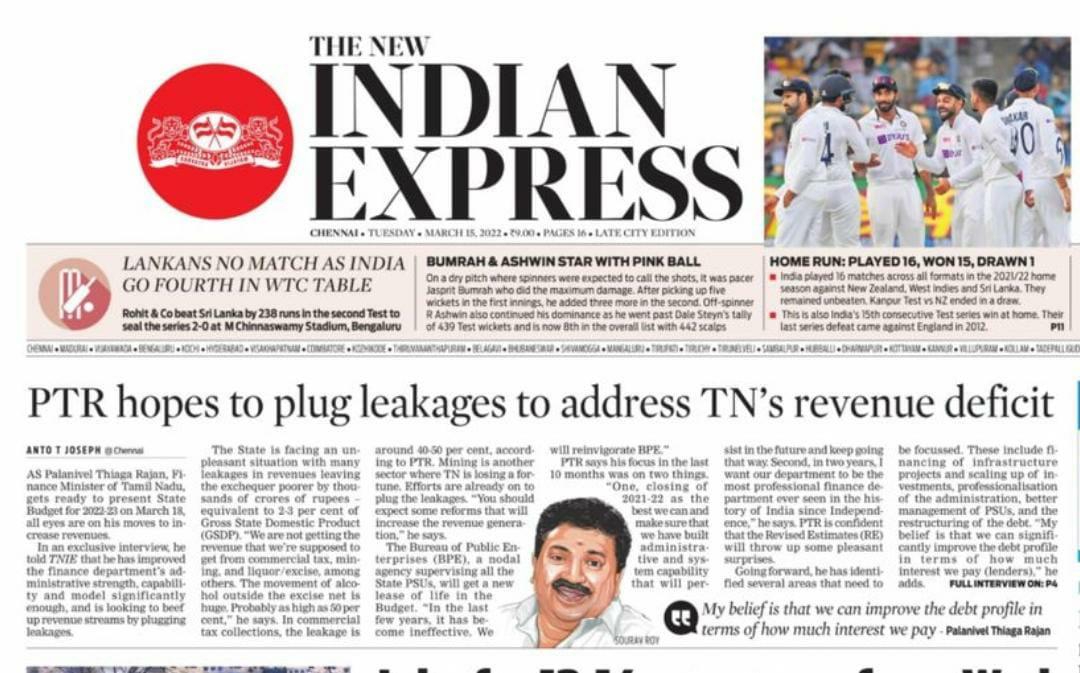 Palanivel Thiaga Rajan, Finance Minister of Tamil Nadu, gets ready to present State Budget for 2022-23 on March 18, all eyes are on his moves to increase revenues.

As Palanivel Thiaga Rajan, Finance Minister of Tamil Nadu, gets ready to present State Budget for 2022-23 on March 18, all eyes are on his moves to increase revenues. In an exclusive interview, he told TNIE  that he has improved the finance department’s administrative strength, capability and model significantly enough, and is looking to beef up revenue streams by plugging leakages.

The State is facing an unpleasant situation with many leakages in revenues leaving the exchequer poorer by thousands of crores of rupees – equivalent to 2-3 per cent of Gross State Domestic Product  (GSDP). “We are not getting the revenue that we’re supposed to get from commercial tax, mining, and liquor/excise, among others.

The movement of alcohol outside the excise net is huge. Probably as high as 50 per cent,” he says. In commercial tax collections, the leakage is around 40-50 per cent, according to PTR. Mining is another sector where TN is losing a fortune. Efforts are already on to plug the leakages. “You should expect some reforms that will increase the revenue generation,” he says.

The Bureau of Public Enterprises (BPE), a nodal agency supervising all the State PSUs, will get a new lease of life in the Budget. “In the last few years, it has become ineffective. We will reinvigorate BPE.”
PTR says his focus in the last 10 months was on two things. “One, closing of 2021-22 as the best we can and make sure that we have built administrative and system capability that will persist in the future and keep going that way. Second, in two years, I want our department to be the most professional finance department ever seen in the history of India since Independence,” he says. PTR is confident that the Revised Estimates (RE) will throw up some pleasant surprises.

Going forward, he has identified several areas that need to be focussed. These include financing of infrastructure projects and scaling up of investments, professionalisation of the administration, better management of PSUs, and the restructuring of the debt. “My belief is that we can significantly improve the debt profile in terms of how much interest we pay (lenders),” he adds.