Tamil Nadu finance minister Palanivel Thiagarajan said aggressive Hindutva will find it very difficult to take shape in a state like Tamil Nadu because the state democratised religion over a hundred years ago and its fundamental value systems will not be disrupted by any form of radicalism.

He also said the DMK government, under chief minister MK Stalin, would seek to attract investment in the state from around the world and also work to accommodate employers who may want to shift their businesses from Karnataka to Tamil Nadu owing to growing communal tensions in Karnataka.

Thiagarajan said in the recent GST Council meeting, he had flagged concerns about the “flawed: implementation of the goods and services tax and “increasing control” of the Union government over institutions that he said would lead to “dire consequences for the country”.

Tamil Nadu is keeping a watch on the happenings in Karnataka as every threat has to be taken seriously, said the state finance minister. "There is a massive interest (from IT companies wanting to diversify to Tamil Nadu), and we are already in the race. There are people actively raising this with us and our government is working on it," he said.

He said Tamil Nadu has seen a 53 per cent increase in investment and that to attract financial investors and corporates, the state government will hold events in different countries within the next six months. “If we invest one rupee in capital investment, we want to match that with external investment,” he said.

Stalin, who was in Delhi last week to meet Prime Minister Narendra Modi and finance minister Nirmala Sitharaman recently, visited Dubai to meet business heads and, according to a government statement, memorandums of understanding worth Rs 6,100 crore investments were signed that could lead to 14,000 jobs in Tamil Nadu.

Though the BJP has been aggressively trying to increase its penetration in Tamil Nadu, Thiagarajan, who comes from a family closely linked with Dravidian politics for over four generations, said the state poses the biggest challenge to the expansion of Hindutva. “If Tamil Nadu turns Hindutva, that will be the final nail for our secular democracy and so I don’t think it will ever happen. Tamil Nadu is the most devout state in the country and it is not because of Hindutva but because we democratised religion long ago,” he said. “Anybody can be a trustee in temples here, anybody can build a temple and take care of it. We sorted such issues over a hundred years ago. Recent archaeological findings about our culture are over 3,000 years old and we have always been averse to any form of radicalism."

Warning that bad policies might have a lasting impact on the country, he said countries such as Turkey and Sri Lanka have faced the brunt of them and are examples for others to learn from. Subverting institutions can have extreme consequences in the long term as lack of debate and consensus would also mean there is a chance for little course correction, he said. “Look at Sri Lanka. They controlled everything with no feedback mechanism or chance of course correction and hence they are in this dire situation. If jobs are created and growth is assured, authoritarianism can continue for an extended period of time, but when it doesn't happen it causes problems for the regime.”

The minister, who has consistently raised issues of federalism in the past, flagged concerns related to the implementation of GST.

“The Union government wants to control everything from dams, ports, transport, education, and all else. There is an increase in concentration of power in the hands of those who have proved they can't get results with it, and continuous reduction of power in the hands of those who could have done something with it but don't have the power anymore," he said, adding that there are at least 19 legislations passed by the state that are waiting the approval of the governor or the Union government. "The state assembly was elected to make laws, but they are not letting us do that," he said.

The execution of the GST, he said, is marred by flaws. “There are consequences for central control of power because there is little scope for accurate results, feedback and course correction. The council is the arbiter. Why are the technical details not made known to us? The bureaucrats are not answerable to people, ministers are. When I asked in December, it was not even clear who the committee members were,” said Thiagarajan.

“It seems it was done only to fit the slogan and the bait and not to actually deliver outcomes. The outcomes have to be reassuring. Almost every flaw in the system now I can trace back to a bad policy since 2014. The enforcement should not be double-headed, with part being done by the Union and rest by the state,” he said. “There is a lot of rationalisation that needs to be done and systems need to be fixed, as clearly look at the rates on toothbrushes, textiles used by common people and something like diamonds… Data sharing has to be fixed as both the Union and states don’t know what each other is doing.”

“The problem is all of us are part-timers and nobody is doing this full time. We need a much more robust full-time secretariat working for the implementation of GST. Without waiting for the Union to act, we have set up our own advisory committee led by senior advocate Arvind Datar. We are funding it ourselves and we will submit reports to the GST council regularly. Nearly Rs 20 lakh crore revenue can come from GST but the flaws have to be fixed and the Union has to listen to the states for that,” said the Tamil Nadu finance minister.

On fuel price hike, for which the Centre has blamed the war in Ukraine, the minister said the timings of the hike are suspicious as the government kept petrol and diesel prices stable throughout the state elections. Asking the states to reduce taxes was not fair, he said, as they had limited direct taxation power. “When you keep relying on indirect taxes, it is only natural that the oil prices will rise. The bad taxation policy of the government is to be blamed for this. Fuel prices are input costs to farmers and fishermen and every industry, and the consequences can be really bad,” he said.

On the freebie culture and welfare policies, the finance minister said it was important to understand the social context of how DMK decided to give free television sets. “Kalaignar (late TN CM M Karunanidhi), in 2006, with his free TVs, wanted to convey a powerful social message that a poor man's child will not have to stand and watch a rich man's TV through the window. It was a one-time thing. This year, we made a thoughtful decision not to operate a scheme that seemed perverse to only incentivise marriage, but we will incentivise higher education for girls,” he said.

Thiagarajan said the state government's decision to offer free bus transport to women is also an attempt to work on the government's stated intent to increase women's participation in the labour work force, and fix the 52 percent non participation in the workforce, bulk of which is women. "Every year we will keep increasing schemes in this regard," he said, adding the state government also had plans to incentivise women to stay in college and join the non-domestic workforce.

He said while it is fair to take from the rich states to give to the poor ones, there should be some economic convergence visible after 15-20 years of such transfers, which is not happening in India. "And that is because we are not incentivising the behaviour that can reduce the gap. Universal education and women empowerment mainly are important, if we don't assure these two, the gap between states like Bihar, where the average education is elementary school drop-out, and Tamil Nadu, where it is high-school graduate, will never be corrected ."

The reforms of the 1990s allowed Tamil Nadu to accelerate as the state could build on the infrastructure since it already had the talent pool and English-speaking people, said Thiagarajan. “Ironically, while the reforms greatly increased India' wealth, they also increased the disparity between states,” he said.

It looks difficult for the AIADMK to revive as the party has "sold its soul to the BJP" and will pay the consequences for it for the years to come, he said, adding that while some people removed from reality who have an yearning for a time when they had the most power, formed a fertile WhatsApp ground for the BJP, the party may find it difficult to grow in the state.

Religious norms are not set in stone and they keep changing all the time, said Thiagarajan, "When my grandfather (PT Rajan) brought the idol of the Ayyappan deity of Sabarimala, which he had made, to Madurai, before it was consecrated, hardcore traditionalists protested because they said it will defile the Madurai Meenakshi temple. There was a debate around the lotus pond in Madurai and my grandfather argued that all Gods are the same,” he said.

“A section of people even refused to come to the temple and set up a different temple on the street, but the debate in a few years turned around how Meenakshi is really more powerful to be defiled by anything else... In a society like ours, it is hard to bring in this kind of radicalism," he added. 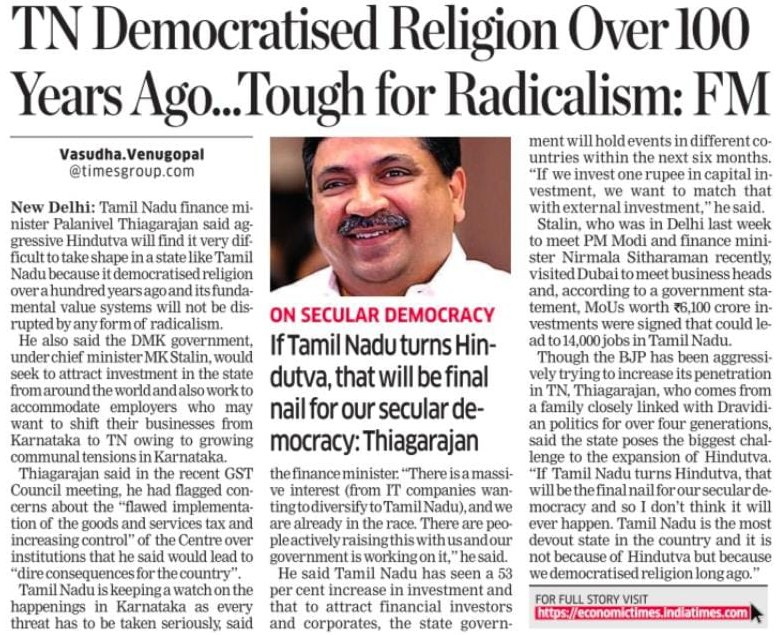