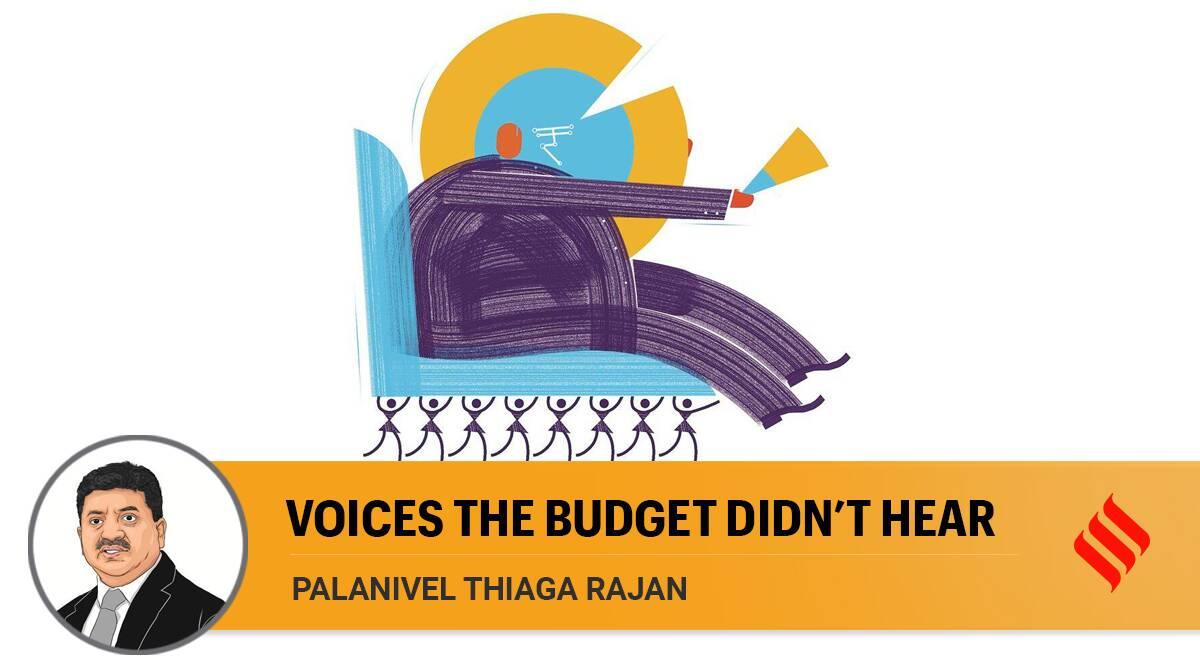 Palanivel Thiaga Rajan writes: It encroaches on state's rights and domains, its politics is evident in low allocations to health, MNREGA and absence of policy push on employment generation and protection

The annual budget is a statement of the government’s economic philosophy. It translates into numbers the principles and priorities that guide the government’s actions. Most politicians would agree that reduced communication and feedback are the unfortunate but inevitable corollary of increasing responsibility and authority. More so at the Union than at the states, the key is to ensure that the finance department doesn’t shape policy with the inputs of only those who can reach the rarified corridors of power, and makes conscious efforts to seek out the voices of the under-privileged who are rarely heard. In that context, I fear that this budget leaves something to be desired.

But let me start with the positives. That the Union finance minister spoke in English (instead of Hindi as in the past) was welcome for many reasons, starting with my own ability to fully understand her speech. It also behooves India’s standing in global markets that her speech should be immediately and directly accessible in a widely spoken language. The restraint shown in not descending to irresponsible populism even on the verge of elections in many states is to be highly commended. As is the Union government’s holistic approach to many programmes under a single umbrella. The progressive view on several leading-edge technologies, including the promised blue-print for battery-swapping to encourage the adoption of electric vehicles, and the incentives for the creation of green jobs are visionary elements. The continuation or extension of MSME relief programmes shows the government has not lost all touch with the stark problems facing MSMEs even now.

But true to the form of the past few years, the budget was tinged with “one rule for us, another for you” hypocrisy and increasing intrusion into the states’ rights. For example, the Union’s fiscal deficit is well above 6 per cent and projected to stay there in the coming year. The projected glide path to a 4 per cent fiscal deficit stretches to 2025-2026. Yet the Union sets the state’s fiscal deficit limit at 3.5 per cent unconditionally (about half of its own level), and at 4 per cent conditioned on power sector reforms. The continuing expansion of centrally sponsored schemes even while shifting the burden of many programmes to the states, is characteristic of the anti-federal nature which is at this government’s core.

Exquisitely creative accounting is another hallmark of this government, as evidenced by the absorption of FCI loans (till-then accrued off the government’s books) in FY ’20 to indicate increased capital expenditures (as promised but not delivered in actual projects) during the pandemic, or indeed the capture of over Rs 50,000 crore of Air India’s liability settlement in this year’s Revised Estimates to show increased capital investments as a function of increasing revenues. But the true work of art — even by Wall Street standards — is the transfer of spending on various grants and schemes into the Rs 1 lakh crore interest-free long-term loan to states. This accomplishes the triple-magic of converting grants to loans, revenue spending to capital investment, and showing an eye-watering 35 per cent year-over-year increase in annual capital investments.

My other broad concerns are the usual suspects. The penchant to name everything “Pradhan-Mantri XYZ”, instead of “National XYZ”, or indeed, just “XYZ”. The laser-like focus on naming, framing and marketing irrespective of the delivery is bound to catch up with the country someday. A classic example of outcomes falling way short of announcements is the Saksham Anganwadi Programme, under which 2 lakh anganwadis are targeted for improvement. Yet the response to an RTI request on this programme (budgeted at over Rs 20,000 crore) in December 2021 stated: “This ministry has no information to furnish as Objectives of Saksham Anganwadi and POSHAN 2.0 is not yet finalised.”

In some cases, the focus on “political publicity value” is precisely counterproductive. For example, it makes no sense that the countermeasure to overcome two years of the ills arising from “remote learning”, should be more remote learning with the catchy slogan of “One Classroom, One TV” and label of “E-Universities”!

The announcement of “One Nation, One Registration” is also puzzling. Registration is a state subject under the Constitution, and most states have inadequate electronic land ownership records even now. Further the rates, concession policies, and validation protocols, all of which are crucial to both states’ revenue as well as effective control of criminal fraud, vary greatly across states. In fact, the land classification system itself varies across states. Given these circumstances, this is a case of kite-flying at best, or an extreme case of poor judgement at worst.

The reduction of surcharges for corporates from 12 per cent to 7 per cent is also puzzling considering stock indices are at record highs. Corporates are earning record profits and sitting on huge piles of cash while private investment is still in the doldrums, and the overall ratio of direct to indirect taxation has skewed grossly towards regressive indirect taxation. As is the (merely) marginally higher fiscal allocation for defence in the face of increasing aggression from China (defence only up 5 per cent).

The inherent contradiction between a long-term policy vision founded on “atmanirbharta” while expecting to scale up exports in a big way seems a bit contradictory. Will other countries really ramp up purchases of our goods and services while we scale down purchases from them as we become increasingly domestically self-reliant? Time will tell.

But the biggest disappointment is reserved for what did not feature in this budget. No holistic approach (like the other PM–XYZ schemes) for either social sector spending or employment generation and protection (MGNREGA budget allocation is 20 per cent below this year’s R.E.), even as we are yet to come out of the second year and third wave of the pandemic — one that has greatly exacerbated inequality and affected most of the bottom two-third of our country.

Perhaps my fears of the inherent risk in budget preparation have been realised, and the right voices did not feature adequately at the right place and time.